The create_agent() function creates an agent object, which is used in a data quality reporting workflow. The overall aim of this workflow is to generate useful reporting information for assessing the level of data quality for the target table. We can supply as many validation functions as the user wishes to write, thereby increasing the level of validation coverage for that table. The agent assigned by the create_agent() call takes validation functions (e.g., col_vals_between(), rows_distinct(), etc.), which translate to discrete validation steps (each one is numbered and will later provide its own set of results). This process is known as developing a validation plan.

The input table. This can be a data frame, a tibble, a tbl_dbi object, or a tbl_spark object. Alternatively, an expression can be supplied to serve as instructions on how to retrieve the target table at interrogation-time. There are two ways to specify an association to a target table: (1) as a table-prep formula, which is a right-hand side (RHS) formula expression (e.g., ~ { <table reading code>}), or (2) as a function (e.g., function() { <table reading code>}).

A optional name to assign to the input table object. If no value is provided, a name will be generated based on whatever information is available. This table name will be displayed in the header area of the agent report generated by printing the agent or calling get_agent_report().

An optional label for the validation plan. If no value is provided, a label will be generated based on the current system time. Markdown can be used here to make the label more visually appealing (it will appear in the header area of the agent report).

A option to include a list with threshold levels so that all validation steps can react accordingly when exceeding the set levels. This is to be created with the action_levels() helper function. Should an action levels list be used for a specific validation step, the default set specified here will be overridden.

A list of expressions that should be invoked at the end of an interrogation. Each expression should be in the form of a one-sided R formula, so overall this construction should be used: end_fns = list(~ <R statements>, ~ <R statements>, ...). An example of a function included in pointblank that can be sensibly used here is email_blast(), which sends an email of the validation report (based on a sending condition).

An option to embed a gt-based validation report into the ptblank_agent object. If FALSE (the default) then the table object will be not generated and available with the agent upon returning from the interrogation.

The language to use for automatic creation of briefs (short descriptions for each validation step) and for the agent report (a summary table that provides the validation plan and the results from the interrogation. By default, NULL will create English ("en") text. Other options include French ("fr"), German ("de"), Italian ("it"), Spanish ("es"), Portuguese ("pt"), Turkish ("tr"), Chinese ("zh"), Russian ("ru"), Polish ("pl"), Danish ("da"), Swedish ("sv"), and Dutch ("nl").

An optional locale ID to use for formatting values in the agent report summary table according the locale's rules. Examples include "en_US" for English (United States) and "fr_FR" for French (France); more simply, this can be a language identifier without a country designation, like "es" for Spanish (Spain, same as "es_ES").

The read_fn argument is deprecated. Instead, supply a table-prep formula or function to tbl.

The types of data tables that are officially supported are:

Other database tables may work to varying degrees but they haven't been formally tested (so be mindful of this when using unsupported backends with pointblank).

There are a few validation workflows and using an agent is the one that provides the most options. It is probably the best choice for assessing the state of data quality since it yields detailed reporting, has options for further exploration of root causes, and allows for granular definition of actions to be taken based on the severity of validation failures (e.g., emailing, logging, etc.).

Different situations, however, call for different validation workflows. You use validation functions (the same ones you would with an agent) directly on the data. This acts as a sort of data filter in that the input table will become output data (without modification), but there may be warnings, errors, or other side effects that you can define if validation fails. Basically, instead of this

you would use this:

This results in an error (with the default failure threshold settings), displaying the reason for the error in the console. Notably, the data is not passed though.

We can use variants of the validation functions, the test (test_*()) and expectation (expect_*()) versions, directly on the data for different workflows. The first returns to us a logical value. So this

returns FALSE instead of an error.

In a unit testing scenario, we can use expectation functions exactly as we would with testthat's library of expect_*() functions:

This test of small_table would be counted as a failure.

While printing an agent (a ptblank_agent object) will display its reporting in the Viewer, we can alternatively use the get_agent_report() to take advantage of other options (e.g., overriding the language, modifying the arrangement of report rows, etc.), and to return the report as independent objects. For example, with the display_table = TRUE option (the default), get_agent_report() will return a ptblank_agent_report object. If display_table is set to FALSE, we'll get a data frame back instead.

Exporting the report as standalone HTML file can be accomplished by using the export_report() function. This function can accept either the ptblank_agent object or the ptblank_agent_report as input. Each HTML document written to disk in this way is self-contained and easily viewable in a web browser.

Data Products Obtained from an Agent

A very detailed list object, known as an x-list, can be obtained by using the get_agent_x_list() function on the agent. This font of information can be taken as a whole, or, broken down by the step number (with the i argument).

Sometimes it is useful to see which rows were the failing ones. By using the get_data_extracts() function on the agent, we either get a list of tibbles (for those steps that have data extracts) or one tibble if the validation step is specified with the i argument.

The target data can be split into pieces that represent the 'pass' and 'fail' portions with the get_sundered_data() function. A primary requirement is an agent that has had interrogate() called on it. In addition, the validation steps considered for this data splitting need to be those that operate on values down a column (e.g., the col_vals_*() functions or conjointly()). With these in-consideration validation steps, rows with no failing test units across all validation steps comprise the 'pass' data piece, and rows with at least one failing test unit across the same series of validations constitute the 'fail' piece.

If we just need to know whether all validations completely passed (i.e., all steps had no failing test units), the all_passed() function could be used on the agent. However, in practice, it's not often the case that all data validation steps are free from any failing units.

A pointblank agent can be written to YAML with yaml_write() and the resulting YAML can be used to regenerate an agent (with yaml_read_agent()) or interrogate the target table (via yaml_agent_interrogate()). Here is an example of how a complex call of create_agent() is expressed in R code and in the corresponding YAML representation.

In practice, this YAML file will be shorter since arguments with default values won't be written to YAML when using yaml_write() (though it is acceptable to include them with their default when generating the YAML by other means). The only requirement for writing the YAML representation of an agent is having tbl specified as table-prep formula.

Should you need to preview the transformation of an agent to YAML (without any committing anything to disk), use the yaml_agent_string() function. If you already have a .yml file that holds an agent, you can get a glimpse of the R expressions that are used to regenerate that agent with yaml_agent_show_exprs().

Writing an Agent to Disk

An agent object can be written to disk with the x_write_disk() function. This can be useful for keeping a history of validations and generating views of data quality over time. Agents are stored in the serialized RDS format and can be easily retrieved with the x_read_disk() function.

It's recommended that table-prep formulas are supplied to the tbl argument of create_agent(). In this way, when an agent is read from disk through x_read_disk(), it can be reused to access the target table (which may change, hence the need to use an expression for this).

Multiple agent objects can be part of a multiagent object, and two functions can be used for this: create_multiagent() and read_disk_multiagent(). By gathering multiple agents that have performed interrogations in the past, we can get a multiagent report showing how data quality evolved over time. This use case is interesting for data quality monitoring and management, and, the reporting (which can be customized with get_multiagent_report()) is robust against changes in validation steps for a given target table.

Creating an agent, adding a validation plan, and interrogating

Let's walk through a data quality analysis of an extremely small table. It's actually called small_table and we can find it as a dataset in this package.

We ought to think about what's tolerable in terms of data quality so let's designate proportional failure thresholds to the warn, stop, and notify states using action_levels().

Now create a pointblank agent object and give it the al object (which serves as a default for all validation steps which can be overridden). The static thresholds provided by al will make the reporting a bit more useful. We also provide a target table and we'll use pointblank::small_table.

Then, as with any agent object, we can add steps to the validation plan by using as many validation functions as we want. then, we use interrogate() to actually perform the validations and gather intel.

The agent object can be printed to see the validation report in the Viewer. 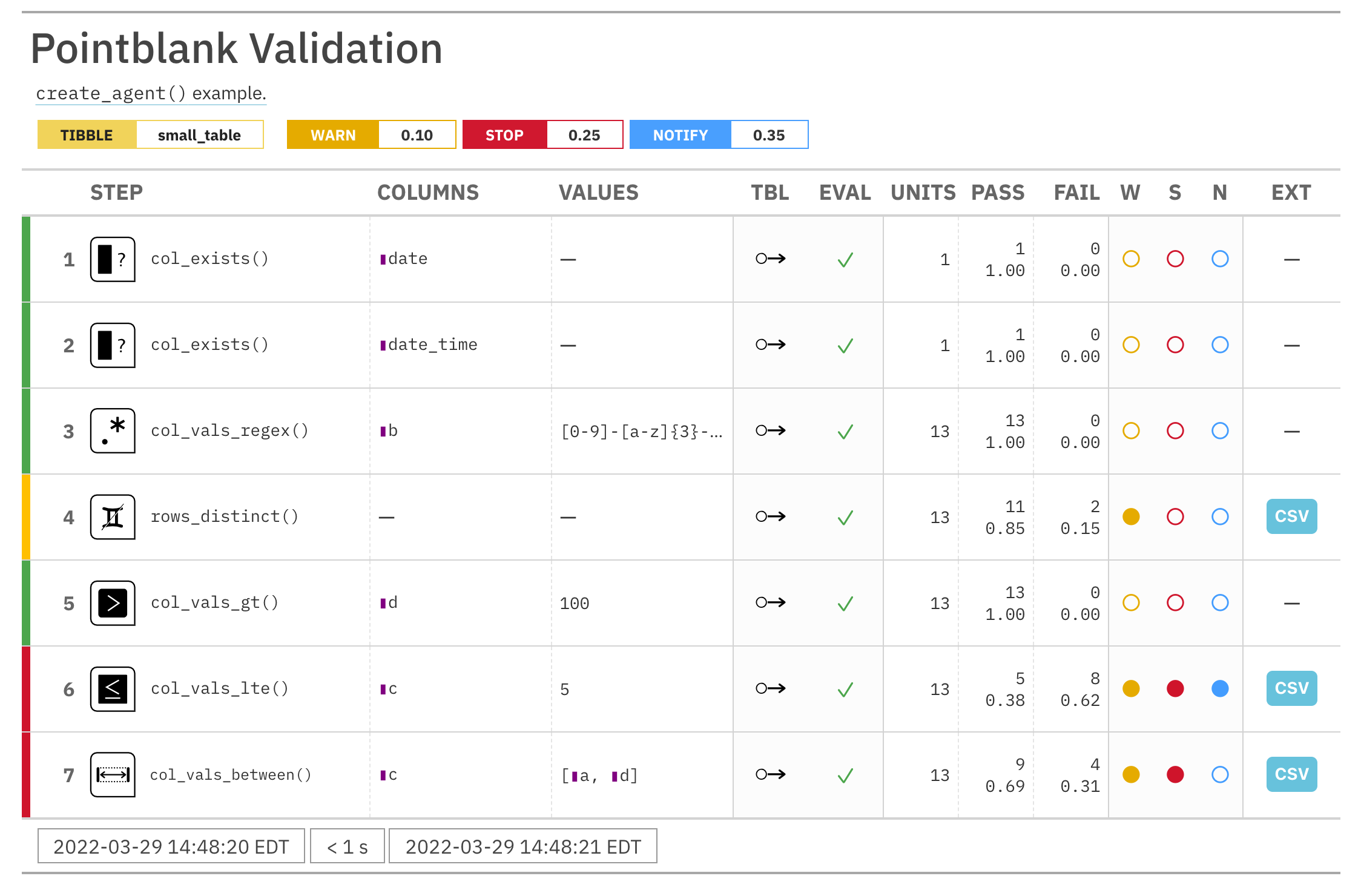 If we want to make use of more report display options, we can alternatively use the get_agent_report() function. 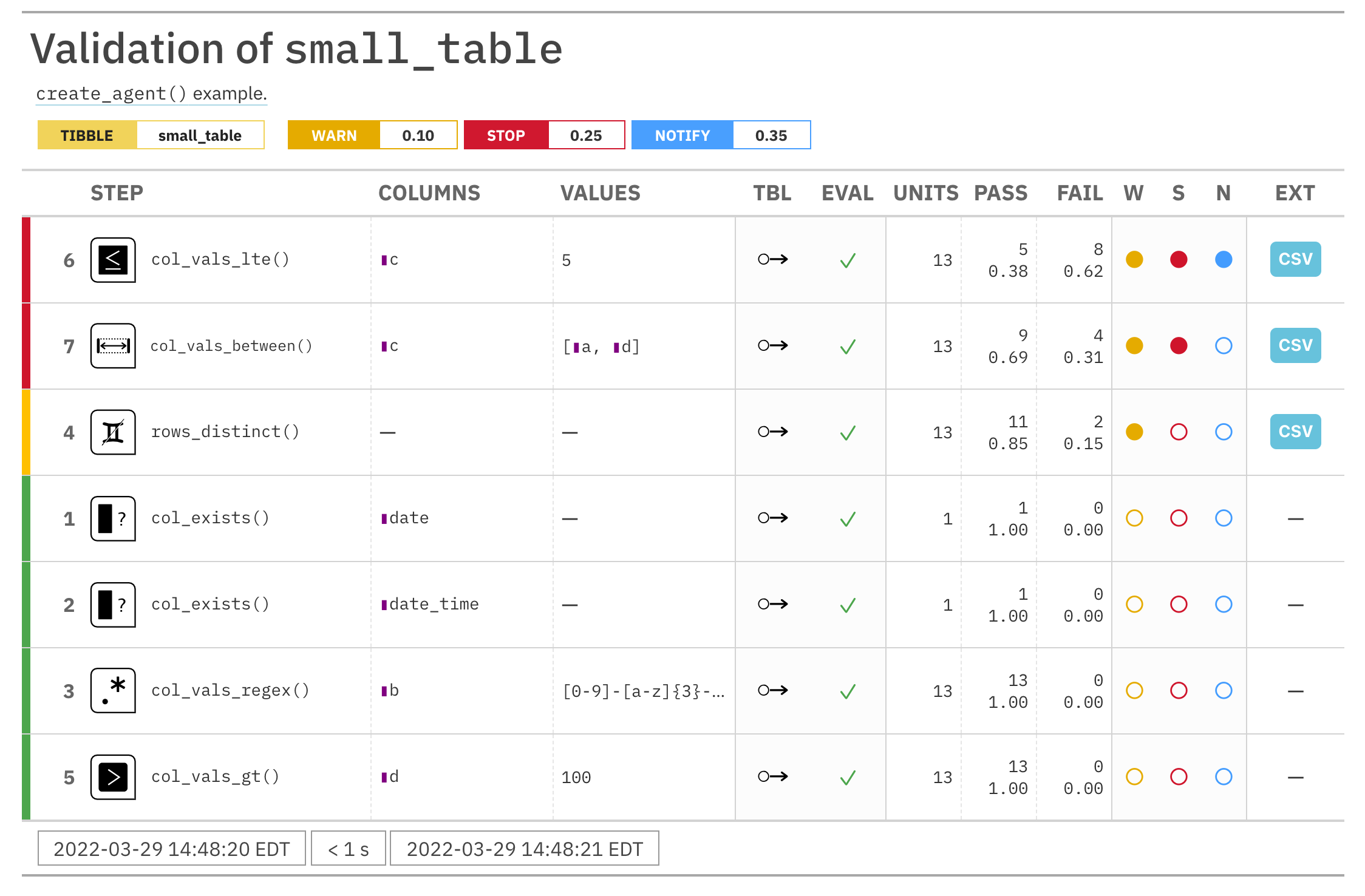 We can use the agent object with a variety of functions to get at more of the information collected during interrogation.

We can see from the validation report that Step 4 (which used the rows_distinct() validation function) had two test units, corresponding to duplicated rows, that failed. We can see those rows with get_data_extracts().

We can get an x-list for the entire validation process (7 steps), or, just for the 4th step with get_agent_x_list().

And then we can peruse the different parts of the list. Let's get the fraction of test units that failed.

Just printing the x-list will tell us what's available.

An x-list not specific to any step will have way more information and a slightly different structure. See help(get_agent_x_list) for more info.